I woke up on Friday morning and knew something was wrong. Despite my intention of making it out to every show, reading, and dinner, a stomach flu kept me home that day. Although I regrettably missed Amery Sandford and Pepa Chans zine making workshop, readings by Heather Nolan and Violet Drake, and sets by Emo Pope, Syngja, Blunt Chunks, Eastern Owl, Ritual Frames, Doxx, Frail Hands, and Yee Grlz, I was lucky enough to have some kind pals write about and photograph some of them for me.

Violet Drake took cool command of the room at Broken Books. Though she tackled difficult topics such as violence, sexual assault, alienation, and dysphoria, she addressed the crowd with a certain gentleness. Her poetry was heavy, impactful, important. You could feel the weight of it in the room. For me, the most powerful aspect was how she brought her characters to life with their accented Newfoundland voices. These voices drew soft giggles from the crowd, yet they spoke harsh realities of judgement and ignorance, reminding me of every “it’s only a joke b’y” I’ve ever heard. Violet’s poetry is rooted firmly in Newfoundland soil, but it is not afraid to dig up a little dirt.

After hiking up Signal Hill and eating tacos at the Eastern Edge gallery, I headed to The Republic to see the late show for Out of Earshot day 2.

Yee Grlz (NFLD) started their set with my absolute favourite track who’s protecting who. They played all the songs from their new EP mercury retrograde, which should be added to your end of summer playlist immediately. Catherine Roberge also introduced their song imposter syndrome by saying “This song is about thinking and worrying you won’t be good at something but then doing it anyways – it’s about saying fuck it and having fun with your friends!”, a sentiment Chris Murdoch later echoed during his presentation Black Dots on Day 3. 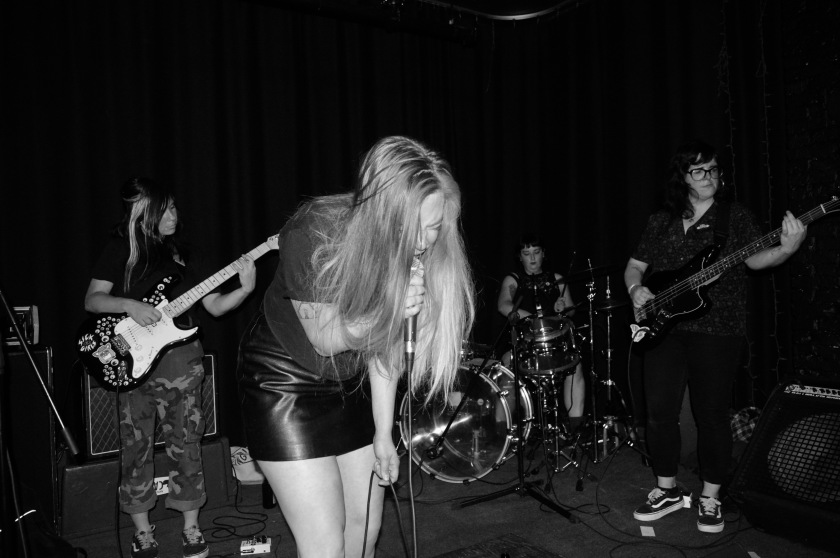 Frail Hands (HFX) played next – opening up with the song image of you from their newest split with Ghost Spirit (CA). This was the tightest set I’ve ever seen Frail Hands play. It’s rare to see a skramz band playing a punk festival but this is the perfect example of the inclusive and diverse nature of Out of Earshot. My favorite part of the set was at the end when vocalist Dawn parted the crowd like a sea and took up the space she needed for their final and most emotional track every volatile thing.

DOXX (OTT) closed the show and played the absolute ripper of a song STAB RISK from their most recent EP. At this point all the dominion beer was sold out at the bar which could possibly explain why I don’t remember the exact order of their setlist. This was the first time DOXX played in Newfoundland and you can tell that it won’t be their last – they were the talk of the town. Their set left me wondering how music so mean (see: chain) can come from the sweetest people you’ll ever meet.