I arrived in St. John’s on Thursday afternoon with a few hours to spare before the first events for Out of Earshot. It wasn’t supposed to rain, but it started to drizzle as I made my way to Eastern Edge Gallery for the artist dinner and first show of the festival.

I met so many kind and wonderful organizers, performers, artists, and friends of friends as I ate my (delicious) tofu burger. It was quickly obvious that the organizers of Out of Earshot were attentive to creating a supportive, comfortable, inclusive, and safe environment.

Nicole, from Hard Ticket, was hosting the first event. With Amery Sandford’s (BBQT/Baby Bunny) installation behind her, she took the stage to acknowledge the land, review the code of conduct, thank everyone involved, and introduce the first act of the first show – Hopscotch.

Hopscotch (NL) is a trumpet, bass, and drum trio that captured my attention because of the way they play with volume and space. Many of their songs started quiet with a lot of empty space, and as the song progressed they filled that space through dynamics and added percussion pieces. It was dramatic in a way that inspired me.

Claire Whitehead (TO) followed Hopscotch and gave another dramatic performance. Half of her set was her solo project, called Claire de la Loopa, where she used her loop pedal to build up her songs using violin and guitar. I felt lucky, in a way, to be there and bear witness to the way she creates music.

Closing the Eastern Edge show was Baby Bunny (NL), also known as BBQT (QC), but with members Sarah and Noah. Although it was so sweet seeing Amery bounce around with her art installation behind her while wearing the custom guitar strap she made for herself, my favourite part of any Baby Bunny/BBQT set is the way Allison sings along while playing drums. 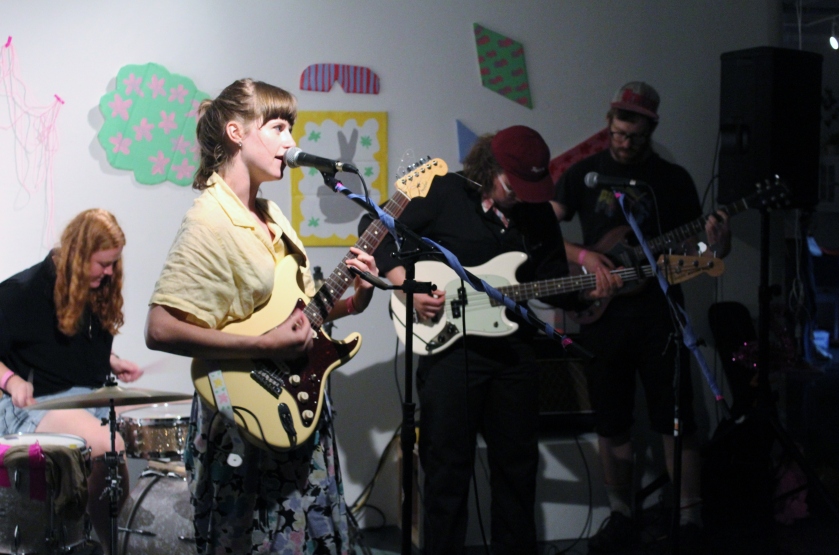 Following Eastern Edge, I walked up to Water St. to get to The Ship for the late show with Lo Siento (NL), Property (NL), Rabies (NS), and Laps (QC).

Lo Siento started as soon as I had arrived. Pepa Chan, a musician and artist, was playing between two of her installations of soft plushy toys strung up to the ceiling from the floor. My favourite part of this set was when everyone shouted “no! no! no! no!” along with Pepa during No Tengo Remedio.

Following Lo Siento was another local band, Property. It was during this set, specifically during a song about St. John’s, that I recognized how supportive St. John’s is of their local music scene. They showed up, wearing Property shirts, and stood as close to the stage as possible to sing along with Sarah Harris.

Rabies, from Halifax, played next. I was able to interview Rachel (guitar/vocals) prior to the festival and in this interview she explores the feelings she had before she started playing music. She wrote, “it’s so easy to feel embarrassed”, yet at this show she took the center of the stage and played with confidence that assured us she belonged there.

The first day of Out of Earshot came to a close with Laps (QC). Although, quite honestly, I couldn’t make it to the end of the night because I was coming down with a flu, I was able to see Laps earlier this week in Halifax. Stephanie Muise (“smuise”), who was at their show at The Ship said, “their sharp tone and chaotic riffs reminded me of North of America; they proved that math rock is very much alive and well“.