On April 25th, not your boys club presented Lo Siento (NFLD) with scrambled meggz (NFLD) at the Green Bean Café in Windsor, ON. On the afternoon of the 25th, Lo Siento—Pepa, Andrea, and Meg (of scrambled meggz and filling in for Allison on drums)—pulled up to my house in their (hilarious) royal blue Dodge Charger. We had some time before they needed to load into the venue, so I took them across the river to Detroit to see the installations at the Heidelberg Art Project and the Detroit Industrial Gallery. 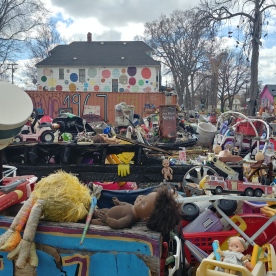 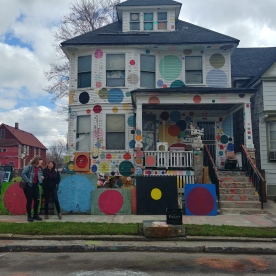 After our visit to Detroit, Lo Siento loaded into the Green Bean Café for their early show. Green Bean Café is a safe, accessible, dry, and inclusive space with a large capacity, great food, and a welcoming atmosphere. It was the perfect venue for the first not your boys club show. Before, between, and after sets, I played my favourite records (women and trans musicians only!).

Once a handful of people were there, scrambled meggz started her set. Meg has a way of making a show feel intimate and personal as if she’s playing in her living room to her closest friends. My favourite track that Meg played for us was “2 little lazy eyes (a song for pepa)” which was realeased on the two-track album xoxo only a few days before Lo Siento went on tour. When Meg didn’t have a trumpet for the solo, she compromised and sang it for us.

Lo Siento did not disappoint. Pepa sings in spanish, but regardless of language, she gets her (feminist) message across. Two specific songs, “Historia en el Placard” and “No Es No”, really resonated with me.

“Historia en el Placard” is a song that Pepa wrote about her experience of moving to Canada and learning of the injustices that Indigenous people face. She told us she wrote it specifically about the residential school systems and forced assimilation, and with the recent failures of justice for Colton Boushie and Tina Fontaine, this live performance hit me hard.

Second, “No Es No” (translates to “No Means No”) is a song about rape culture, victim-blaming, and informed consent. The song begins with a lyric that translates to “tired of feeling afraid”; a relatable lyric for any vulnerable person who is told that they are responsible for having resistance strategies when “no” is not enough.

Lo Siento delivered a set that was unapologetically sincere.  Their performance was a window into their unwavering friendship; while laughing at their mistakes and refusing to take themselves too seriously, they also communicated love for one another all throughout their set. It is unmistakable how much fun they have playing music together.